Memories: A Celebration of the Artistry of Marguerite Frances Sylvia Exhibit

HACCM is currently closed until December 1st as were prepare for our newest exhibit! We look forward to seeing you soon. 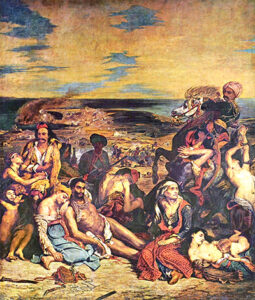 Since ancient times, Philhellenes, friends of Greece and Greek culture, have existed worldwide. In 1821, four hundred years after the fall of the Byzantine empire and the Ottoman occupation, the Greeks decided to fight for their independence and freedom. Many people in Europe and the Americas were inspired by the Enlightenment era of the West. During that time they believed that philosophy, science, the arts and many aspects of daily life had their foundations in ancient Greece. Learn more about this pivotal time in Greece’s history!

Click here to watch the recording of the presentation!

Before and during the Greek War of Independence the Seven Ionian Islands participated with the Filiki Eteria -The Society of Friends – in the planning of the Revolution of 1821. In addition, they provided protection and shelter for many families of the revolutionary war fighters during the Revolution as well as financial support and participation in many battles on the war. Save the date.