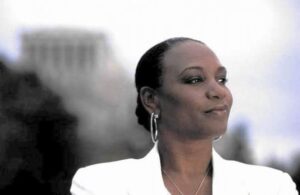 An American in Athens: HACCM in conversation with Yvette Jarvis

The Hellenic-American Cultural Center & Museum of Oregon and SW Washington presented an online interview with former Athens city councilwoman Yvette Jarvis. Ms. Jarvis was in conversation with Stacey Gianopoulos about her experience of immigrating to Greece in the 1980’s from the United States.

This interview, presented via Zoom free-of-charge, was part of HACCM’s fall programming focusing on immigration, migration, and life in the adopted country.

Former Brooklyn Borough President Marty Markowitz summed it up, “only in Brooklyn” will you find a story like hers! From the streets of RedHook to City Hall in Athens Greece, Yvette is a woman of many firsts.

Yvette is the First:

Always aware of the importance of the weight of being the best example of a good American, in addition to in many cases a first introduction to Greece’s nascent society to Black America, she immersed herself into Greek life and culture with reverence and respect.

Yvette repatriated to the United States in 2012 with her husband John Muller and their son John Jacob Muller.

A second-generation Greek-American and a cradle Orthodox, Anastasia was born and raised in St. Louis, Missouri surrounded by a large, extended Greek family. Having received a B.S. in Education/Speech and Theater from University of Missouri and a Masters in Communications from Colorado State University, Anastasia moved to Oregon to pursue a career in radio, public relations and marketing. She has lived in Oregon for 43 years.

A passionate world traveler, Anastasia has combined her love of unique cultures and physical challenge, by visiting third world and developing nations. She has trekked the Himalayas to the Everest Base Camp in Nepal; the Salkantay Trail and Macchu Picchu in Peru; rafted the Nile in Uganda; camped on safari in Kenya, and hiked in the Amazon rainforest.

Married for 36 years to a Greek immigrant, Anastasia and Andy have two grown children.
The family owns Larsen’s Creamery, a company which manufactures fine butter products sold throughout the Pacific Northwest.

She enthusiastically enjoyed the opportunity to speak with Ms. Jarvis about her cultural experiences.